Sketches of The Obsessive Drafter
Facial capture and generative sketches
The Obsessive Drafter is a large autonomous robot arm that interpretively draws portraits of the people that approach him. Initiated and led by Guillaume Credoz who created the mechanical structure, and completed by collaborations with Nareg Karaoghlanian for mechatronics including mobility program, and myself for the sketch generation process.
Saint-Étienne Design Biennial 2017
March 9 until April 9 2017, Building H - Cité du design: TOD was exhibited as part of "Si automatique?" . During the month-long performance, it was to fill a 6 by 3 meters wall with sketched portraits of visitors…

Photo: Panorama of 'Cité du design'
Sketch generation process
Using C# (visual studio 2013) and EMGU, an OpenCV wrapper.
The software will automatically capture the faces of visitors, through a webcam attached at TOD's wrist, then convert the image into a short sketch for feeding to the machine.


1) Computer Vision
I didn’t train my own sets, but used the default OpenCV eyes and faces haar cascade

definitions that comes with the installation: A basic usage of those definitions alone returned a lot of false-positives .
In other words this pattern of haar face features:

, (or similar ones) can be found almost anywhere: cloth creases, tiling, reflections, light interference in camera, etc.
Some filters were created:
Here’s a capture testing session, against a 46 min documentary : 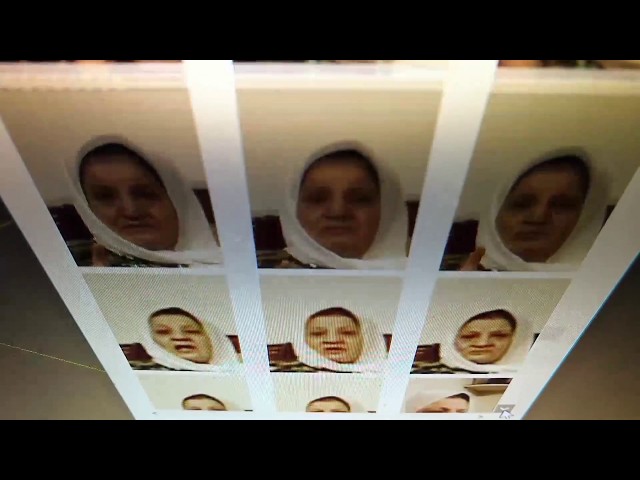 A face being tracked has a score
float score = area * properties.dimensionsScoreMul + time * properties.timeScoreMul + eyes * properties.eyesScoreMul;
Variables are limited (ie, eyes:[0, 2]) and the highest possible overall score is 1.
For a 0.25 eyes score multiplier, a one-eyed jack would usually lose against a two-eyed queen, even if there capture dimensions where a bit smaller.
that is updated each frame.

This score is then used while pooling for a portrait to sketch, including a final additional time filter: As the performance last a month, we initially intended for some of the captured visitors to still be around when their portraits are being sketched on the wall.

The sketch routine was suggested to be a continuous circling line with variable diameter depending on the brightness of the underlying area.

The steering behavior of the pen tip was to be defined.

A quick prototype was created in AS3:
A wandering particle that is attracted by the color proximity of neighboring areas, in turn this particle influence the underlying area by progressively fading it out of existence.

Another approach
A couple of different trials later, I decided to stop playing and define specific rules: Normalize and filter the capture image, create a dithered version, order the dither points to generate a path, detailing the picture along it.
Image filtering:
Edges are also extracted, using Hough transform, and were intended to add additional detailing around the center of the face: eyes, nose, mouth. But were not ultimately used.
Dither map:

Weighted by distance (between vertices), hue, brightness and proximity to center. This will tend to build up the face in quasi-sequence by facial feature.

Each path node is encircled once, and the path can break when distances are above a threshold.

Below is one the final results, an unavoidable sketching the lovely Lena Soderberg: 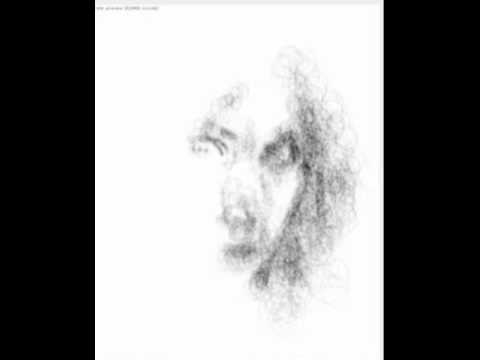 Wall filling & scenario:
A completed sketch is a normalized turtle graphic. It’s transformed to fit the next available cell on wall according to a running scenario, which data are written to disk.

The entire process runs on a windows laptop, the drawing commands get sent to the Arduino via serial communication.

Machine execution
The wall at the end of the month: